Remember when you went to arcades as a kid? Some of the games were really cheap, like Whack-a-Mole. Others, like Cruisin’ USA, cost four quarters to play. Likewise, a team needs to put in four quarters of effort to have a chance at winning a college football game. This fact was readily apparent in the following matchups of week 8.

California at Washington: Down 17-24, Washington quarterback Carl Bonnell tossed the football towards the end zone on the last play of regulation. None of three Cal players underneath the ball managed to bat it to the ground. Instead, the ball bounced into the hands of Husky receiver Marlon Wood, who dove into the end zone for a touchdown. In overtime, Bonnell threw into another Cal jersey, and this time Desmond Bishop picked him off. Luckily, the Bears’ poor defense against the Hail Mary didn’t cost them the game.

Texas at Nebraska: Halftime in Omaha found Texas winning 16-7. In the second half, the Longhorn defense gave up two touchdown drives to the Cornhuskers. Up 20-19 with 2:17 left, all Nebraska had to do to win was make a few first downs and kill the clock. It looked like they would do just that until Terrence Nunn fumbled a nine-yard pass. Texas walk-on Ryan Bailey made his first ever college field goal, and the Longhorn D batted down two Hail Mary’s from Zac Taylor to end the game 22-20. 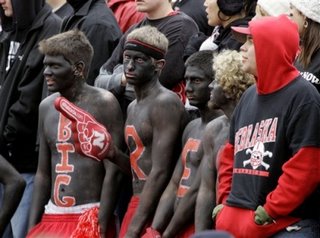 Thanks to Nebraska, these guys stood half-naked in 40-degree weather for nothing. Nice going, Cornhuskers.

Notre Dame at UCLA: Up 17-13 with 0:55 left on the clock, UCLA looked as if it was going to upset Notre Dame right beneath the gaze of Touchdown Jesus. However, the Bruin defense backed off of Brady Quinn for his final drive, allowing the quarterback to move the Fighting Irish from their own 20 to the UCLA 45 with two passes. Then, Quinn hit Jeff Samardzija, who faked out defenders and hightailed it to the end zone. Talk about defensive self-detruction.

Michigan State at Northwestern: The other three games pale in comparison to the second-half nature of this Big Ten matchup. Northwestern went to the locker room leading Michigan State 38-3 at halftime. The Spartans scored 38 unanswered points in 24:36 minutes of gametime to beat the Wildcats 41-38. Michigan State came back from the largest deficit in the history of Division I-A college football.