Alabama currently has six more Iron Bowl victories than Auburn. The Tigers have won five in a row and seven of the last ten, so they are clearly dominating the modern series. Let’s say that Auburn wins, on average, three out of every four matches in the next half century. In that case, they would close the gap by two wins every four years and pass Alabama’s win count around 2020. I’ll give them another ten and make it 2030, just in case the ‘Bammers decide to hire one of their secret clones of The Bear.

“Well,” you may be thinking, “It’s great to know that Auburn will eventually own the Iron Bowl series. When will Tommy Tuberville pass Bobby Bowden and Joe Paterno as the winningest coach in Division I-A college football history?” Tubbs has 95 wins right now, and JoePa, who will probably pass Bowden (364) in the next year or two, has 362. JoePa is already 79, but I can’t see him retiring until he is at least 90. By that time, Tuberville will be 63. Let’s assume for simplicity’s sake that the two coaches stay even until JoePa retires/dies.

If Tuberville loses more than four games in consecutive years, Auburn alumni would probably kick him out of office. That won’t happen, since Tuberville and Borges are a force that can only be stopped by inept defensive coordinators. Just to be safe, let’s say he only wins eight games a year for the rest of his career. In that case, Tuberville would need 34 years to pass Joe Paterno’s record. So when Tubbs is 97 in 2051, he’ll be the winningest coach ever with over 450 wins. I hope I’m alive to witness the achievement and yell “I told you so!” at passers-by.

They’re up and at the link to your right. I’ll explain my BCS selection process real quick:
Ohio state has locked up a spot in the title game, and if USC wins they weekend like they should, they’ll remain #2 and go to the title game. The Rose gets the first two picks in compensation for losing both their teams. The easy pick is Michigan. The second pick isn’t as easy – they basically have two options:
1) Take Notre Dame, who just lost big to USC and lost big to Michigan already
2) Take a second team from the SEC, like LSU
Honestly, I think both will sell plenty of tickets. LSU fans are high off their win over Arkansas. It’s not exactly every day either ND or a SEC team goes to the Rose – neither set has been there since the 40’s. I hope against hope the Rose tries to produce a good football matchup and takes LSU.
Next is the Sugar, which needs an opponent for the SEC champion (either Arkansas or Florida). I like Notre Dame here if the Rose doesn’t take them.
After that is the Orange, which needs an opponent for the ACC champion. The only teams left to pick at this point are the two remaining auto-bids: the winner of the Big East (either Rutgers or Louisville) and Boise State. The Orange will likely take the Big East champ, leaving Boise State to play the Oklahoma-Nebraska winner in the Fiesta.

The Rose is where this whole thing hinges. If they take Notre Dame (or someone else besides LSU, basically) then the Sugar will probably wind up with the Big East champ, allowing the Orange to take LSU or some such. In any scenario, the Fiesta goes last, meaning they get Boise State. (I’m all for mid-majors getting chances in the BCS, but that Utah team in 2004 was scary good. Boise State, not so much.)

Other games of note:
Cotton: I’m tentatively sending Auburn out here, but the Cotton is always reluctant to pick teams from that far east. They may take Arkansas if they are available (like if Tennessee or Auburn were taken in the Capitol One).
Peach Chick-fil-a: The bowl said last week they’d take the UGA-Tech winner, but at any rate it seems like they want 10-2 Virginia Tech a lot. The ACC title game loser will probably fall to the Gator for the second year of the row, which the Gator people probably isn’t terribly happy about. Look for the ACC title game to move out of Jacksonville in the few years, either further south or back up to the heart of ACC country in Charlotte.
Holiday: This is usually a good game, but this year, the Pac-10 team brings the rushing offense (relatively) and the Big 12 team bring the West Coast style offense? WTF, mate?
Emerald and MPC Computers: FSU and Miami play on a baseball field and the blue turf! My schadenfraude knows no bounds here.

Also, Kansas, Rice, and Kentucky all making bowls? Mama mia, what a year! 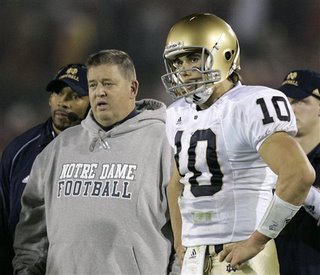