Sometime next week I may ave a more substantive post than this (two projects, going to be out of town this weekend, woo-woo). For now, though, my thoughts on the current state of the ACC were summed up by this conversation with a friend of mine, talking about the Maryland-FSU game:

Me: UMD’s only conference loss is to us
Me: they win and they’re right up there with WFU and BC
Him: RIGHT *UP THERE*
Him: With WAKE FOREST
Him: ACC FOOTBALL

No post for now, except that more than 1 Sun Belt team will get a bowl bid this year. You can access them via the link on your right. I may edit this if I have some sort of free time later this week (hah!). 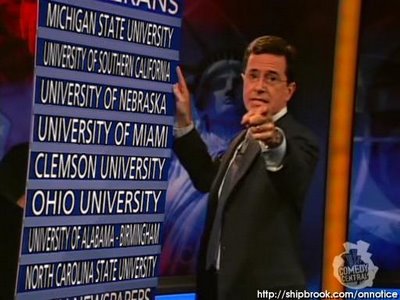 Before I begin, I think yesterday’s whipping of Clemson by Virginia Tech officially ends any validity of the Transitive Property in application to college football. If you forgot, recall that: 1) GT whipped VT a few weeks ago in Blacksburg, 2) Clemson whipped GT last weekend in Clemson. So, yeah.

Anyway, let’s do this. As always, this reflects my being here in Atlanta, which means these are the games I get on the Georgia Tech Cable Network and that the times are Eastern.

7:45: Tennessee @ South Carolina, ESPN: Fulmer! Spurrier! The UT of the South seems to be good this year, and despite Spurrier blowing out Vandy last week, UT should roll.

That’s all I got kids. Feel free to dispute below.

Well, last week was pretty awesome for the Tito College Football Predictor. The CFP went 44 and 11, an 80% success rate in its first week of the 2006 season. The system even correctly picked the Washington State upset over Oregon. The largest margin of a missed pick was 5.0 (Oklahoma State over Texas A&M), so the higher margin ranges looked really good last weekend.

This weekend, the CFP went out on a limb and made five questionable upset picks. Oklahoma State is up 10 points on Nebraska, who looked pretty good against powerhouse Texas last week. Missouri is actually 4.9 points up on Oklahoma, but that’s with the 5-point home field advantage. Navy is picked to beat Notre Dame (also with the home field advantage) by a ratings margin of 3.2. (This is the one I doubt the most. The last time Navy beat Notre Dame was in 1963. That’s 42 straight losses to the Fighting Irish.) Purdue was picked over Penn State by 2.4 points. Lastly, Oregon State was picked by 0.2 over USC. (You know which one I want to happen most.) What’s the likelihood that all five of these will happen? Almost zero. Still, I’ll be surprised if none of them do.

Michigan, Boston College, Ohio State, and Arkansas all get gimmees this week. They are all favored by 16 points or more over their opponents (Northwestern, Buffalo, Minnesota, and Louisiana-Monroe). We’ll see how my year-to-date record is holding up at the end of Saturday. You can find the rest of this week’s picks at http://tito.asimweb.org/cfp/week9.html.