Well, it’s finally time for me to dispense my thoughts on the next two weeks of football. I’m sure you have all been waiting eagerly at your computer screens to read this. I stayed up past my bedtime to get this in by the promised Tuesday night deadline, so you’d better all be appreciative. In chronological order, here are the rivalries! (All times Eastern!)

Tennessee at Vanderbilt (11/18, 12:30 PM, ESPN Plus): The Commodores pulled off an upset last season, their first win in the series in twenty-two years. Vanderbilt hasn’t beat Tennessee twice in a row since the 1920s. I don’t expect that streak to end any time soon.

Michigan at Ohio State (11/18, 3:30 PM, ABC): As good as Michigan is, they won’t beat Ohio State in this year’s “Game of the Century”: “Judgment Day”. The real shame is that the loss will prevent the Wolverines from reaching the title game. Because they will be idle, Michigan will be passed by whoever emerges victorious from #3-#8. None of those teams deserve it more, but that’s the way the BCS cookie crumbles.

Auburn at Alabama (11/18, 3:30 PM, CBS): Thankfully, there is now nothing to distract Auburn from their trip to Tuscaloosa. I’m kind of scared that the Tigers could blow it anyway, considering how bad they looked against Georgia last weekend. Will Cox duplicate last Saturday’s “which team is which?” performance? Doubtful. Plus, there’s no way I could pick the Tide with a clear conscience. Let’s make it five in a row, Tuberville! 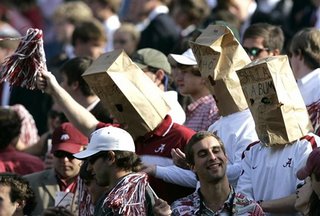 I hope these guys need their paper bags again when Auburn comes to town.

California at USC (11/18, 8 PM, ABC): As much as I want it to happen, I don’t think California’s going to beat USC. The Bears are coming off a devastating loss to Arizona. Even though a win would mean the first Rose Bowl trip for the school since the 50s, I don’t think the motivation will be enough to overcome USC’s frustrating luck.

Texas A&M at Texas (11/24, 12 PM, ABC): With Texas’ starting quarterback injured and their defense in a slump, this year is the best shot the Aggies have had at beating their long-time rivals in a while. I’m tempted to predict an upset here, but A&M hasn’t been able to win close games this season (see Texas Tech, Oklahoma, and Nebraska). What the heck. I’ll pick the Aggies anyway.

LSU at Arkansas (11/24, 2:30 PM, CBS): LSU was barely held off at Auburn, trounced at Florida, and last-minute victorious at Tennessee. I’m hoping they’ll improve to 2-2 away in Fayetteville, but there is too much riding on this one for the Razorbacks to falter. They are the real deal, folks. McFadden, Jones, and Monk will destroy the Tiger defense and prepare for a showdown with the Gators in Atlanta. 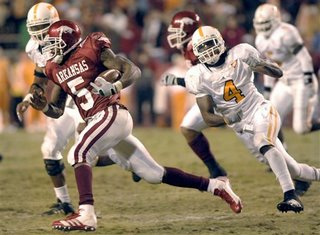 After taking care of the Vols, few are doubting Arkansas any more.

Florida at Florida State (11/25, 12 PM, ???): Last year’s matchup was an embarrassment to the Seminoles, and this year won’t be much different. Now that Jeff Bowden has resigned, Florida State can work towards winning this rivalry by the end of the decade. They might as well start Saturday.

Georgia Tech at Georgia (11/25, 3:30 PM, ???): Georgia’s win at Auburn was probably the worst thing that could have happened to the Yellow Jackets. The Bulldogs will carry the rivalry momentum back to Athens with high hopes to recover an awful season. However, Tech hasn’t won for five years straight and is on its way to an ACC championship. I think the Yellow Jackets have a little more incentive, don’t you? Nick and Ehren, I hope you enjoy the win!

Notre Dame at USC (11/25, 8 PM, ABC): The privilege of closing the “four-peat” (actually, “‘two-out-of-three’-peat”) door on the Trojans will be reserved for Notre Dame. Brady Quinn is going to use Army as a warm-up for his destruction of USC’s defense. Touchdown Jesus is going to fly from his end zone in South Bend to get revenge for last year’s “Bush Push” nonsense. The luck of the Irish will overcome USC’s 31-game home win streak, and it will be beautiful.

I’ll be back in two weeks to see how wrong I was and offer my thoughts on Rutgers/West Virginia and the conference championships. Enjoy these matchups while you can. After that, it’s another month until the good bowl games, then eight months until college football returns. Dang.