4:30: Michigan @ Pennsylvania State (ESPN): As you can tell, I’m tired and writing these previews with even less analysis than usual. My apologies. At any rate, has Michigan looked bad these past two weeks or what? Penn State rolls into their huge game against OSU next week.

That’s all for now. Bowl predictions probably won’t be up until Monday evening, but I’m looking forward to getting back on that old horse.

However, I’ve also said some fairly wrong things over the course of these 7 weeks. Last weekend, for instance, I was wrong about almost all of the morning slate.

Anyway, I wanted to do a wrap-up column here but I’m feeling pretty tired. Bowl predictions return next week, so look forward to that.

Busy again, so let’s get down to business.

1:00: East Michigan @ Army (ESPN Classic): Not only did Army actually win last week, they beat a DI-A opponent, and pretty badly at that. (The victim was Tulane, and the score was 44-13.) Tulane may or may not be better than New Hampshire, but that’s beside the point. Eastern Michigan lost 4 straight, getting drubbed by even the two MAC teams they played. However, a last minute touchdown put them past Bowling Green, so here we are. They’re probably the better team, but this is enough of a toss-up (I hope), so I’ll pick the sentimental favorite, Army.

3:00: Nebraska @ Texas Tech (FSN): Over/under on points scored by Texas Tech alone should be around 50 or so. I’d still take the over.

10:15: California-Los Angeles @ Oregon (FSN): …because it’ll probably be better than this game, at any rate. Both these teams found some mojo against hapless Washington State (enroll now, try out for QB tomorrow!) but Oregon then went and had the unfortunate chance of playing a USC that actually showed up for the game. I’ll still take the Ducks here, though.

I check the official BCS website every once in awhile to see if there’s any news I need to know about for the bowl predictions.

I also check it because as the official mouthpiece of the BCS, it enjoys posting, shall we say, pro-BCS articles. Needless to say, if their frontpage turned into this I wouldn’t be surprised: 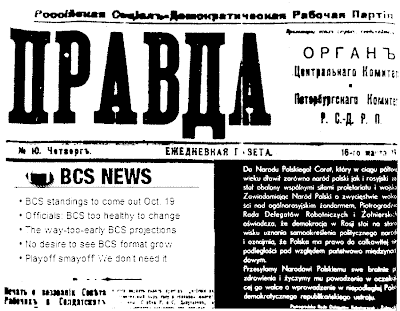 Been busy as hell this week, not much say. Let’s get started.

As usual, all times Eastern and all predictions wrong. Also, expect plenty of typos.

2:30: Stanford @ Notre Dame (NBC): Notre Dame has re-discovered this year that to win football games, you usually need to outscore your opponents. Stanford, meanwhile, hasn’t lost to any obviously inferior opponents, but with the game in South Bend I’ll give the edge to the guys in gold hates and then move on.

4:00: Navy @ Air Force (Versus): Clash of the service academy titans! The winner here, as with the past several years, pretty much wins the Commander-in-Chief’s trophy. Navy has victories over two BCS conference opponents (even though one of them is Rutgers), while Air Force lost to the only decent team it has played (Utah). I’ll go with the Midshipmen here.

6:00: Auburn @ Vanderbilt (ESPN): It’s Auburn! It’s Vanderbilt! It’s your SEC PRIMETIME GAME OF THE WEEK! Growing up with the Daves I’ve always had a special place in my heart for Vanderbilt football and it’s nice to see they’re making another run at bowl eligiblity after almost getting over the hump in 2005 and 2007. Unfortunately, it looks like the foundation of this year’s edition of the Commodores isn’t built very well. As the linked article points out, Vandy is last in the SEC in several categories except for turnover margin, which pretty much means they’re getting really lucky. So will the luck run out? I have to think, yes, it will. (That said, Vandy still has games against Miss State and Duke and while neither team is a pushover, per se, they should win at least one of the two.)

7:30: Washington @ Arizona (Versus): Arizona is 3-1? When did that happen? Of course, that includes a loss to New Mexico and a win over UCLA, which lends a certain air of unpredictability. The main focus is here is whether either of these coaches will be employed by their teams at the end of the season. I would say it’s worse for Willingham, since no one really expects Arizona to not suck. And I expect it for that to continue.

9:00: Missouri @ Nebraska (ESPN): We’ve all seen the replays over-and-over again from the Nebraska “das boot” game a decade ago. That is a seriously unlucky end zone for Mizzou. Fortunately for them, Nebraska isn’t very good this year. Mizzou and Chase Daniel prevail.