I’m sure you are all dying to read about how my predictions turned out. Die no more!

“Calvin Johnson has been shut down all year, and Reggie Ball hasn’t done too well without him. Wake Forest hasn’t put up many points either this year. I’m expecting a close defensive struggle. Neither team will score more than thirty points, but it’s impossible to pick the winner. No one seems to want the ACC title this year.”

Once again, Reggie Ball and the Tech offense he “leads” looked awful. The quarterback hit the Johnsons a few times, but most of his passes were not on target. I still can’t figure out why the Yellow Jackets continually called deep shots downfield when Ball kept missing his receivers. Ball’s scrambles seemed impulsive and didn’t produce many yards. I was right about the close defensive struggle, but I should have said the two teams would score less than thirty points combined. This was probably the worst game of the day for those watching TV. Due to the drizzly weather, the fans in the stands probably didn’t have much fun either.

“USC returns to the Rose Bowl nearly eleven months after Vince Young denied them a second straight national championship. UCLA almost upset Notre Dame at home, but USC just smashed Notre Dame, so that doesn’t mean much. The Trojans will win, but I will get my hopes up anyway and spend the entire game yelling at the television.”

I did spend the entire game yelling at the television, but not in vain. UCLA’s defense stepped up in a big way, and the final interception was amazing. I think Vince Young’s spirit was with quarterback Patrick Cowan, whose scampers down the field were just enough to put the Bruin offense in scoring position. The Trojans’ title hopes were destroyed in the Rose Bowl for a second straight season. (Ironically, they might lose in the stadium again in the Rose Bowl [bowl] on New Year’s.)

After the game, Carroll looked dumb-founded, and Booty looked like the pretty-boy quarterback I now expect to see at USC. Seriously, does Carroll recruit his quarterbacks from the sets of soap operas? Here’s my question before I move on to other games: Now can the media stop talking about USC? I doubt it. ESPN has probably already projected the Trojans to win the next ten (if not twenty) national championships. 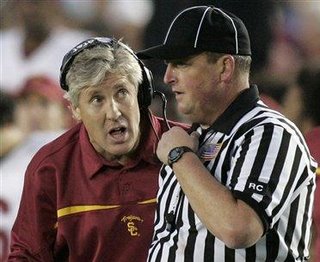 “Will Arkansas rebound from a close loss to LSU? Will Florida rebound from a string of flat offensive performances? Both will probably happen, making this matchup the best game of the day. I’m pulling for Florida for the sake of BCS controversy, but the Razorbacks will probably be so upset about last week that they’ll win.”

It wasn’t the best game of the day, but this was one of the wildest I saw all season. Chris Leak threw two interceptions and fumbled to himself twice in the nightmare that was the Florida quasi-option offense. Inside his own ten, Arkansas punt returner Reggie Fish attempted to catch a football that even Auburn’s Tre’ Smith would have avoided. The Gator recovery in the end zone, followed by a beautiful touchdown run by Percy Harvin, put the game out of the reach of the Razorbacks. I was wrong about the Arkansas win, but the BCS controversy was right on target.

The Big East might not be on par with the nation’s other top conferences just yet, but it sure can produce a thriller. Last night’s matchup was one of the most exciting games I saw all year. Kicker Jeremy Ito had another chance for glory, but his 52-yard field goal attempt to win the game fell short. I was disappointed when Scarlet Knight quarterback Mike Teel failed to complete the two-point conversion that would have sent the game into a fourth overtime. It has been exciting to see a program like Rutgers come so far (even if their schedule is worthless).

Yesterday was a bittersweet ending to the 2006 college football regular season. It produced some great televised matchups, but now I have to find something else to do with my weekends. I’ll be back later this week to post my Heisman ballot and complain about the final BCS standings.