Last weekend, Louisville was poised to win the rest of its games and finish third in the BCS standings. The debate raged over whether an undefeated Big East team should be ranked above a one-loss team from one of the other six major conferences (the answer, in my opinion, is no; see my last article for an explanation). When Rutgers beat the Cardinals Thursday night, a crowd of one-loss’ers and the undefeated Scarlet Knights all looked like they had a chance at reaching the title game. How would the BCS successfully rank this many good teams? The system everyone loves to hate looked like it was going to reach a new low of confusion.

Then, the unthinkable happened: three of the teams in the top ten of the BCS standings lost to unranked opponents.

First, Auburn was dominated at home by Georgia, whose 37-15 romp of the Tigers was a perfect storm of sorts. Stafford displayed confidence at quarterback, while Cox completed as many passes to Bulldogs as he did to Tigers (four to each group, out of twelve attempts). Auburn’s defense, which my friend Kyle compared to a block of Swiss cheese, was finally exposed as hideous. Punter Kody Bliss had a serious off-day. Wide receiver Courtney Taylor led the Tigers in rushing with 51 yards. “It isn’t good when your wide receiver is your leading rusher,” said tailback Brad Lester. Agreed.

Later in the day, California fell at Arizona, 20-24. The Bears outproduced the Wildcats 356-262, but three California turnovers and two fourth-down conversions by Arizona made the upset possible. I never thought California was all that amazing, but to see them fall like this is a bit surprising. Perhaps there is more parity in the Pac-10 than SEC fans like myself give it credit for. (What am I thinking? Of course not.) At Kansas State, another Wildcats team upset Texas. On the Longhorns’ first drive, star freshman quarterback Colt McCoy was injured underneath a pile of players. Unfortunately for Texas, the Longhorns’ defense couldn’t slow down the Wildcats enough for the offense to outscore them. 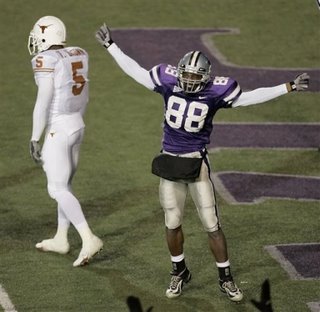 #5: Auburn, California, and Texas.
#88: Georgia, Arizona, and Kansas State.
Basically, these three upsets of major teams were a huge break for the BCS, which should be renamed “Benefits from Chaotic Seasons”. Barring a rematch of the Big Ten Championship, six teams now have a reasonable chance of reaching Arizona in January: USC, Florida, Notre Dame, Rutgers, Arkansas, and West Virginia. What’s amazing is that all six of those teams will play one of the others by the end of the season, simplifying the BCS headache. What’s ridiculous is that USC is ranked above Florida and Rutgers is ranked above Arkansas.

I’ll be back by Tuesday night with my terribly uninformed game predictions for the next two weeks. Until then, please write angry emails to the AP Poll voters for ranking USC #3.

2 thoughts on “The BCS Survives Again”