I woke up at 6 AM on Saturday morning. When my alarm went off, I looked out the window to discover that the sun had not even thought about coming up yet. I was tempted to go back to sleep, but I thought, “No; I’m going to do this!” The “this” in question was a walk to College GameDay, ESPN’s travelling Saturday morning broadcast. This weekend, Lee, Kirk, and Chris paid a visit to Auburn. I arrived on site at 7 AM. It was about 55 degrees outside, and there were probably two hundred fans already waiting at the gates.

GameDay was interesting. Some drunk frat guys in front of me made the wait until airtime a lot more interesting. One of them named Forest convinced the crowd around us to sit down so he could take a nap. Now that I think about it, I’m pretty crazy for sitting on damp grass near the baseball stadium at 8 AM on a Saturday morning, all for the slim chance of getting on national television. Even worse, my third row spot behind the GameDay desk was too far back for me to get on TV.

After Herbstreit and Corso picked the Gators, GameDay ended and I walked to my grandparents’ motor home. One of their friends, an older Auburn fan, had dressed up in a Florida State jacket and straw hat. I must say, he did a pretty good job of looking like Bobby Bowden. For most of the morning, he sat on top of a nearby motor home and did the tomahawk chop at Gator fans passing by on the road. It’s pretty funny how crazy old football fans are. That guy makes me wonder what I’ll be like at his age. 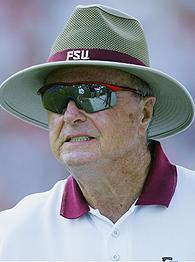 Seriously, Bowden looks like one of the dinosaurs from Jurassic Park or The Land Before Time.

Next up, I walked all the way across campus to hang out with a girl I met in Vermont this summer. She goes to the University of Florida and was up for the weekend to see the game. We went to the university bookstore and watched Georgia lose to Vanderbilt. It was funny to watch both Auburn and Florida fans cheer when Vandy’s final field goal went straight through the uprights. Heather and I parted ways around 3 PM, when I walked over to the student gates to claim my spot in line. I had been awake for nine hours, and four were left until kickoff.

In spite of (or perhaps because of) our embarrassing loss to Arkansas last weekend, the Auburn student section was out in full force this Saturday. You could definitely feel a nervous but hopeful vibe among the crowd during the three hours we spent in the stands before the game started. The energy continued to build until the pre-kickoff video, which brings the excitement like nothing else. By this point, the sun was setting, and the sky was turning orange and blue. It was definitely an omen in our favor.

The first quarter was rather ho-hum. Both teams drove the length of the field only to kick field goals, an accomplishment for previously 0-of-4 Florida kicker Chris Hetland. Considering Florida’s prowess at scoring touchdowns, Auburn’s defense had seemingly “plugged the Leak” of the Gator offense. However, the D didn’t hold that long. Early in the second quarter, Chris Leak hit Dallas Baker in double coverage for a fifteen-yard touchdown. In retaliation, some students in the end zone tossed the extra point ball up the stands and out of the stadium.

After another unproductive set of downs for Auburn, Florida’s offense scored a safety for the Tigers by committing holding in their own end zone. The momentum shifted towards Auburn, now down only 5-1o. John Vaughn tacked on three more to make it 8-10. Three plays and one questionable personal foul later, Tim Tebow jogged untouched into the Auburn end zone, increasing the Gators lead to 17-8. Another Vaughn field goal sent the teams to the locker room at 17-11. Sentiments in the stands were still nervously hopeful. 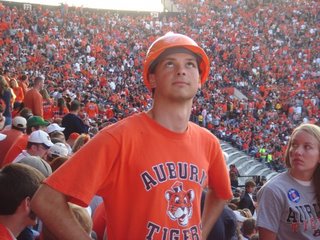 That’s the hard hat I got at GameDay. It’s legitimate and everything; I’m gonna work on the new student union sometime this week.

During halftime, Auburn’s swim teams were commemorated for winning everything ever (or four straight NCAA titles, whichever is more impressive). Next, Auburn mascot Aubie the Tiger performed the opening guitar solo from Van Halen’s “You Really Got Me Now”. Sure, the guitar was made out of foam, but I still think it was pretty awesome. The accompanying fireworks helped, but I think the reason this show ruled so much was the relative lack of noise from the band. Those guys know how to kill a good time.

When the defense came out of the tunnel for the second half, the crowd brought the noise all up ons Chris Leak, who had to call a timeout so that he could hear himself think. Auburn’s D-line made two huge tackles behind the line of scrimmage to force Florida into a punt formation. The student section erupted into chants of “block that kick, block that kick…” Lo and behold, a bad snap forced Florida punter Eric Wilbur to kick the football into the chest of Auburn defenders. Tre’ Smith, of all players, picked up the ball and did a forward flip into the end zone. Could God be any more of an Auburn fan, I asked myself?

Four drives later, God said, “Yes.” The Gators were nearing the Auburn red zone. A field goal would put them up 20-18, so they were almost guaranteed to take the lead. Desperately, I prayed for a turnover. On the next play, Tray Blackmon got so pumped up that he forced a fumble. After a six minute Auburn drive, John Vaughn came out to miss a 46 yard field goal attempt. Visions of the 2005 LSU game, which Vaughn to some extent lost for the Tigers, started appearing before my eyes.

This looked to be the final standoff of the game. Florida had squandered its three timeouts, one on a challenge of the Blackmon forced fumble. They had 2:58 remaining to drive the length of the field and kick a game-winning field goal. I was not sure that Auburn’s defense could pull off the last stop needed to seal the victory. Then, Chris Leak threw an interception directly into the hands of Auburn defender Eric Brock. It was as if God himself had directed the arm-cannon of Leak towards Brock’s chest. The Auburn faithful went crazy go nuts.

After three predictable runs by Brad Lester, John Vaughn redeemed himself by kicking a forty yarder to put Auburn up 21-17. Florida regained the ball with 27 seconds to go. After three incomplete passes, Leak hit Dallas Baker, who lateraled to Jarred Fayson, who fumbled to Auburn defender Patrick Lee, who ran twenty-five yards and dove into the end zone as time expired. The scoreboard read “Auburn 27, Florida 17”. If anyone was wondering what I did with the paper bag, let me tell you that its ripped-up remains were left in Jordan-Hare Stadium.

After visiting Toomer’s Corner, I walked home, showered, and went to sleep. I woke up this morning at 11 AM, the euphoric sensation of victory still swimming around in my head. I suppose you could call it a “hangover of triumph”. I sure would. War Eagle!