This is it. It’s Saturday. Sure, we’ve had a few games so far. But today is it. Today’s first filled slate. From noon to late, there will be college football on somehow, somewhere.

That’s why I love this. As explained below, I grew up in the South, which means that college football is something of a religion and is thus everywhere. Being in Atlanta makes it even better – in addition to the weird, 50th-tier SEC game of the week, we also get the crappy 50th-teir ACC game of the week. In fact, here’s my schedule for today (games involving DI-A teams only, sorry Grambling @ Hampton; also, network shown is network on GTCN, your mileage may vary):

Now, some pictures of GameDay’s setup at GT, as well as their shoot for Friday (click for a larger view): 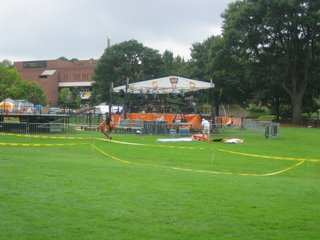 Facing southwest, towards the student center. Took this during the afternoon when they were still setting the whole shebang up – notice the screen isn’t there. You can also see the top of the Shaft Campinile in the background. 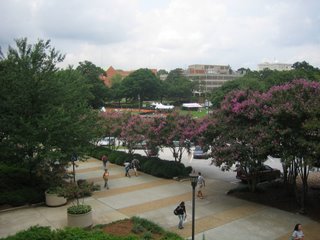 View from Skiles of the Yellow Jacket Park area – this photo faces northwest. 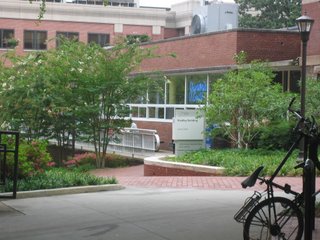 My ultimate destination after the afternoon shots I took. I’m entirely convinced that if everyone on Earth could try a Junior’s chicken finger basket, we would finally achieve world peace – they’re that good. 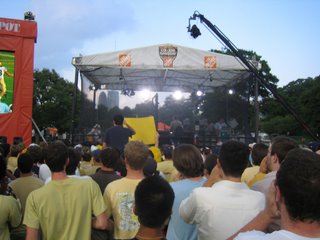 This is during the shoot for the 6:00 SportsCenter, when I was actually in the crowd. 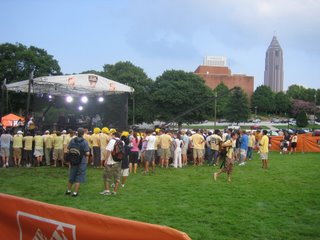 I stepped out of the fenced off area for the 10:00 SportsCenter and ESPN Motion takes. If you look closely, you’ll notice that Corso is the only one that actually wears a full suit – Fowler is wearing jeans, and yes, Hebie is wearing shorts.

For the 10:00 SC (actually broadcast after the Nevada – Fresno St. game), I did get on TV. I have the screencaps to prove it. 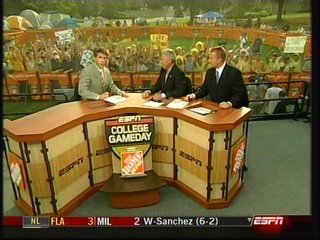 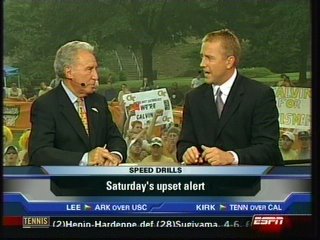 If you want to try to spot me, try opening up the full size version. Good luck.

For now, enjoy the games folks!