9:00 Georgia @ Mississippi (ESPN2): Not quite “Fast Animals, Slow Children”, but should be a bloodpath again. Unless Stafford plays most of the game again. At any rate, Go Rebels!
10:15 Stanford @ UCLA (FSN): Go Trees, er, Cardinal!

Last Sunday, this past weekend looked to be the worst of the 2006 college football season. Most of the games did little to buck that expectation. In fact, it may have been even worse than predicted. Texas and LSU were up a combined 58-14 at halftime on Iowa State and Tulane. The rest of the top ten struggled, often against mediocre to awful opponents. Here were some of this week’s halftime scores:

– #24 Penn State 3, #1 Ohio State 0. Ohio State’s defense finally picked off Nittany Lion QB Morelli to end the game late in the fourth quarter.
– #2 USC 3, Arizona 0. The final score was USC 20, Arizona 3. Didn’t ESPN say USC’s offense reloaded?
– #4 West Virginia 14, East Carolina 7. East Carolina’s mascot is a pirate. They have lost to Navy and UAB. Those facts alone show how silly this score looks.
– #5 Florida 12, Kentucky 7. Kentucky isn’t in Mississippi, but still…
– #6 Michigan 10, Wisconsin 10. This one isn’t that embarrassing, I guess.
– #8 Louisville 10, Kansas State 0. Kansas State beat Illinois State by one point to open their season.
– Colorado 13, #9 Georgia 0. Without two fourth-quarter touchdowns, Georgia would have lost to the Colorado team that lost to I-AA Montana State the first week of the season. If quarterback troubles continue in Athens, I don’t see Georgia beating Tennessee, Florida, Auburn, or Georgia Tech.
– #3 Auburn 10, Buffalo 0. Auburn did pull away to a 38-7 victory (well below my 117-0 prediction). However, Auburn’s defense, run and pass, looked anemic against Buffalo’s offense. This is Buffalo’s offense about which I am talking! I’m going to give myself an extra point for not ending the previous sentence with a preposition.

Speaking of extra points, I bet Alabama placekicker Leigh Tiffin wishes he could have the one I just gave myself after his performance on Saturday. He is shaping up to challenge John Vaughn for “Least Clutch SEC Placekicker.” Everyone says they feel sorry for these guys, but I’m not so sure we should. When a quarterback throws three interceptions in a game (see Drew Stanton against Notre Dame), no one cuts him slack. Why should we cut a kicker slack for missing three, four (see Tiffin against Arkansas), or five (see Vaughn against LSU in 2005) kicks that would have made the difference in the game?

On a random note, I wore my authentic Mexican sombrero to the Auburn/Buffalo game this weekend. I told people that if Auburn was going to schedule opponents as ridiculous as Buffalo, I was going to dress for the occasion. In addition to being hilarious, the sombrero provided some welcome shade from the blistering sun, which produced an 85-degree heat wave in Jordan-Hare. I’m not sure if the people behind me appreciated it as much as I did. 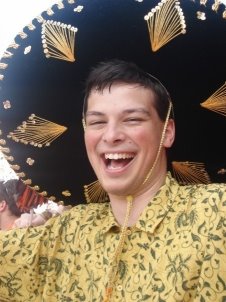 Thankfully, some tidbits of college football news offered hope rather than leaving question marks. Florida State destroyed Rice 55-7. Mississipi State finally won a game, beating UAB 16-10 in overtime. Actually, I guess that was all the hope I saw in the scores. I’m proud to say that Laura watched most, if not all, of the Michigan State/Notre Dame game. I am only sorry that the Spartans could not hold on to the ball long enough to pull off the “upset” for her.

Next weekend looks to be a slight improvement over the previous one, although that isn’t very hard to accomplish. #3 Auburn goes to South Carolina Thursday night (7:30 PM ET, ESPN). On Saturday, #5 Florida hosts Alabama (3:30 PM ET, CBS). Both should be closer games than the rankings would indicate. Georgia Tech visits Virginia Tech (3:30 PM ET, ABC), and Ohio State goes to Iowa (8 PM ET, ABC). I’m looking forward to both of these games but for different reasons. The first might decide the ACC Coastal Division champion, while the second is another chance for Ohio State to lose. Go Hawkeyes!

Hi, I’m Nick’s brother. My idea is to start this blog’s second weekly feature: On the night of or day after the slate of games, I’m going to post an On Notice board that gives you a precise, 8 point recap of the day’s key actions. Without further ado, here’s the first edition: 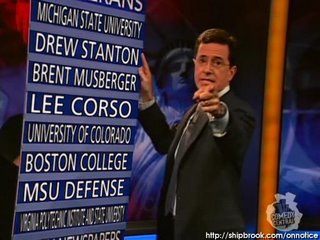 I’d like to welcome my brother to the blog. He’s also a GT student but is co-op’ing back home right now.

I was almost completely wrong about CU @ UGA. But, hey, when you need a last minute TD to beat a team that lost to Montana State….

Also, I guess Matt Stafford is no longer the second coming of Christ.